About the Author: Brendan Lombard is an ultra runner, coach and ‘Bodies by Brendan’ fitness expert, powered by Asics, Suunto and Squirrel’s Nut Butter. Coached by Flat Rock Endurance,  he is making waves in both the road and trail running scene in South Africa, and is one hell of a guy on the dance floor.

Human beings are creatures of habit and when a habit get’s taken away from us we are forced to adapt. Well hell, I knew I had to.

Rewind to end of February 2019. I was being put through one hell of a session by my coach which culminated to about 30km of road running. FAST. I was feeling really good and fitness was improving daily. It seemed as though I had got the recipe right besides the increase in late nights and a few more beers than usual. Newly single I was out to meet people more often than usual, and I believe this could have been a contributing factor to what was to unfold next.

Cruising along at about 3:20/km I felt something give. A pain shot through my glute and brought me to a stop on the side of Spanschemaat River road in Constantia. I knew something was wrong but as a hard-arsed, stubborn athlete I decided, screw it, let’s keep running. This in hindsight only contributed to hurting myself more and I found myself pretty much unable to run without pain and discomfort.

I still continued to tell myself, ‘It’s nothing dude, it will go away in a few days’. This was all unfolding right before I was due to run the Cango Caves Marathon in order to qualify for Two Oceans. This was my last chance to qualify and I really wanted to run a fast marathon. I went on to travel to Oudtshoorn to race while being very stubborn and not informing my coach to the extent of how bad my injury actually was. I ran Cango and man it hurt. I have never run a race in such discomfort but my primary goal of going to qualify with an A seeding had to be done.

I achieved my goal but in doing so probably did even more damage. I didn’t care. Two Oceans had to happen.

Back in Cape Town now I went on to see a chiropractor who told me that he could do nothing for me and that I should book with a specialist at Sports Science. I literally could not run and even walking on the leg put me in discomfort. I went on to book and the official diagnosis was that I had indeed torn my gluteus medius. I was then told what every athlete hates to hear. No running for 4 weeks. My first thought was, ‘there goes my year, all the hard work I have been putting in has gone to waste and I am going to be unfit for Two Oceans’.

I immediately contacted my Coach, Erin Van Eyssen, to find a way in which we could keep some fitness while smashing rehab session after rehab session. I found myself swimming up to 3km sessions and also getting onto the bike a hell of a lot. I was determined that this would not break my spirit and that come hell or high water I would be the hardest worker in the room. My days were now spent in the gym and doing rehab to make sure I could fix the problem.

The interval session I had to do on a watt bike in the gym drove me nuts and I think the only thing that kept me sane and going back was perhaps the amount of good looking females which attended the gym. Cape Town does well here. haha. Man I worked hard during my time off ( in the gym ). My elbow probably came close to getting inflamed too I reckon as my barley and hops intake seemed to increase while running decreased.

I got the job done and I finally had to make a decision to go through with Two Oceans or skip it and just race JMC. I felt confident in the work I had been doing and my physio, Anwar Louw, did a test with me and gave me the all clear at about a week or two I think it was away from Two Oceans. I was stoked, to say the least. Finally, I could RUN!

For those that don’t know me, I can be extremely stubborn and once I decide to go through with something you will literally have to chop my legs off to stop me. I decided that Two Oceans HAD to happen and that I was going to run it as a “training run.” #BULLSH%T,  haha. 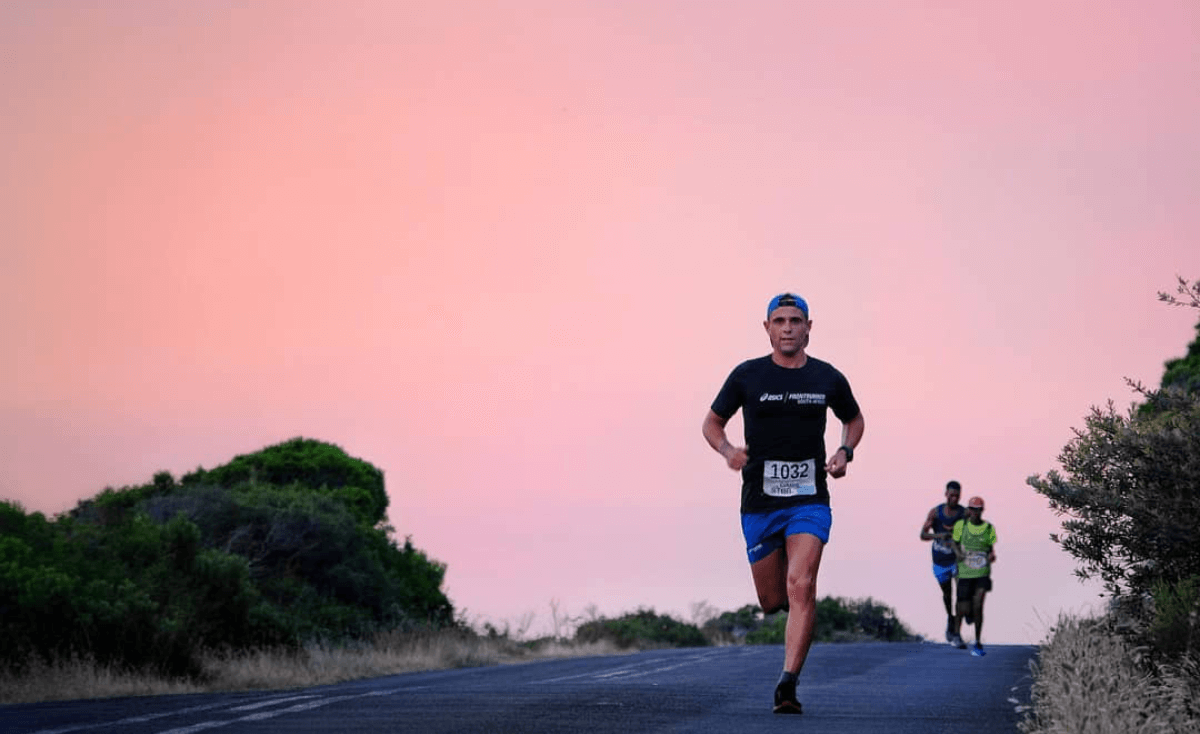 The day of Two Oceans arrived and I had no expectation for myself. I decided to just give it a go and see what happens. I started off very conservatively as I had no idea how fit I would be and surviving the race just sounded like a good idea. I knew if I wanted to run a silver I would have to hold just over 4min/km.

The turning point for me came at the bottom of Ou Kaapse Weg. Man, I felt strong and I decided let’s start to move now. I went through the marathon mark in around 2:46 if I remember correctly and knew that I still had Southern Cross to climb. We are trail runners, we know how to crush a hill. Having run the half marathon before, I knew that once on Rhodes Drive the legs can really start moving nicely and going down towards Kirstenbosch I started pushing a bit harder. I really felt good on the day and was pretty happy to look down at my watch with a 3:48 finishing time for the 56km and kudos must be given to Erin for having so much patience with me and also instilling confidence in my ability as a runner.

My first Two Oceans was now done and I promised myself that I would be back with a faster goal time for 2020. There has also been talk of Comrades and I might just be tempted to give it a crack. I enjoy the speed of the road and that raw feel of racing hard in a pack. 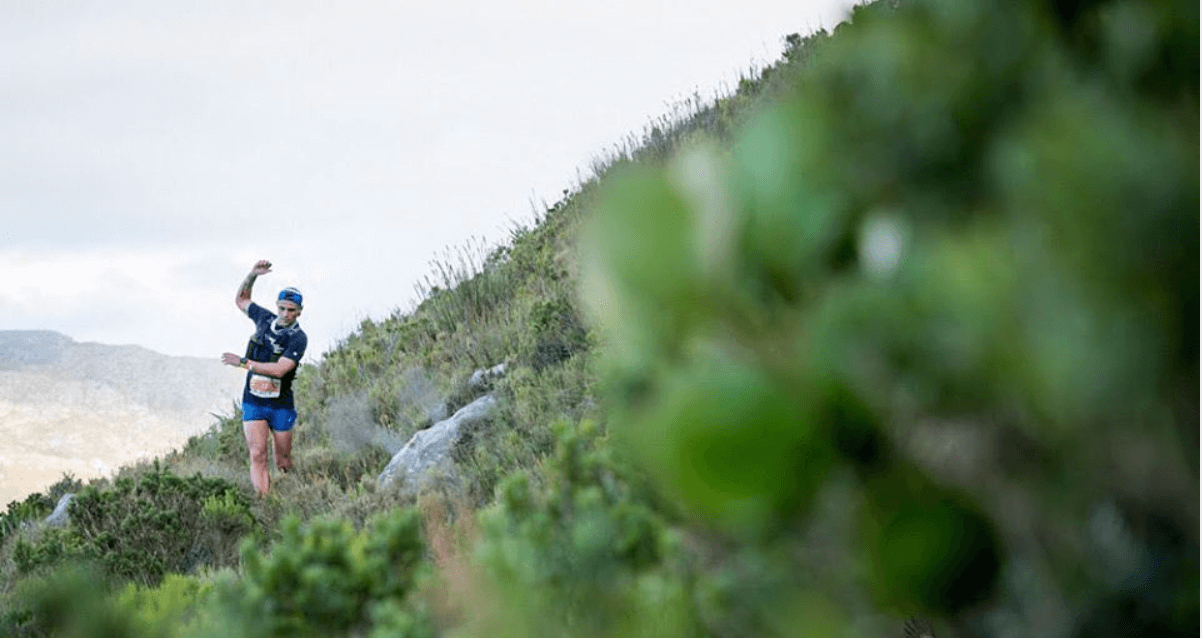 Although I had now had a good Two Oceans, I was still yet to test my fitness on the trails. I had planned to race JMC to get the ball rolling again and to get the legs used to some proper mountain running. JMC being a fair amount shorter to what I usually race, I once again went into the race with no expectations except to have a good time in the mountains. I planned to run to my strengths and was pretty nervous to take on the technical sections but I think my body has become far more conditioned and I seemed to handle the rough stuff pretty well.

Those who train with me know that I am not a fan of a technical descent but I think I am slowly overcoming that fear and I am learning to embrace the flow of technical running and not overthink it too much. The race started pretty fast and I decided to stick with Bernard and if I blew, then oh well. I backed myself and went with it, on every climb my legs just seemed to tick over and everything just clicked. I knew that after the technical descent the single track taking one back to the finish was a really fast section and I knew I could bang out some fast running.

I didn’t look back and told myself to just simply be, run and soak up where I am as this was my first race back and win or lose I was happy to just be running again. The race went well and I ended up 2nd to Siviwe who had a stellar morning out in the mountains. I feel like JMC really gave me a boost mentally. I was finally running the way I used to as a kid, hard and fast.

That sort of no holds barred, lung-busting, leg gearing running. The kind of running which gives you a rush and reminds one exactly why you chose to do a sport.

I am telling you about these races so as to get my point across.

As runners, there will no doubt come a time when we suffer an injury or a setback. What I learned was that it is all about the attitude we show toward the situation which will determine the outcome. I chose to not let it beat me. I chose to accept it and do my best to heal and prevent it from happening again. I chose to fight.

There were times where I was not too stoked about the situation, but forcing myself to control my thoughts kept me sane and getting outside via other means of exercise most certainly helped. We are human beings and not robots. We can’t push our bodies without taking care of it, so I have adopted an entirely new approach to my running which I have been implementing since the doctor gave me his diagnosis. The small things count, do not overlook them. If I could give any runner some advice, it would be to take care of the small things.

I also want to reiterate that an injury does not necessarily mean that our world has come to an end and that in order to create success sometimes we need some form of destruction in order to build something new.

I am far more appreciative of being able to run and experience life in a way that is almost magical. The majority of human beings find themselves living in a hamster wheel and just going through the motions every day. Running has been the biggest gift I have given myself. My life is by no means ordinary and I get to experience things some will likely never get to.

Moving within surreal landscapes and getting to encounter the world through first-hand adventures with friends who are real and not virtual, is to me something that I will never take for granted. Finding stoke on a Saturday morning on top of Table Mountain while the city sleeps below has got to be one of my favourite memories and I continue to live it over again when taking on our infamous rock.

We all have this existential crisis where we are in search of meaning and fulfillment. I think I can honestly say that running has given me the ability to solve this and I am genuinely at peace with who I am as an individual and the way in which I have chosen to live. I am thankful for running and I don’t regret being injured. I am stronger now and have figured out my, “why”.

Now you just have to ask yourself. Am I living?

We asked Brendan what his race day kit list is – here’s what he had to say:

We at RUN are all about community and would love to hear your stories about overcoming injury! Also show a brother some love and give him kudos for sharing his story in the comments below!

One Reply to “Setbacks Create Comebacks”