Two Horsemen and a White Chameleon

About Naomi: If you can’t get hold of her, she is either busy trying to sew a stray dog’s ear back on, painting something, farming with her dad, or running… Mostly running though. She is a kind and compassionate woman who would go to the end if the earth for you (especially if you’re an animal, but humans too). Most recently, besides crushing at UTD,  Naomi set out to walk the circumference of Lake Malawi in support of the African Pangolin Working Group (APWG). I told you, she’s a badass. 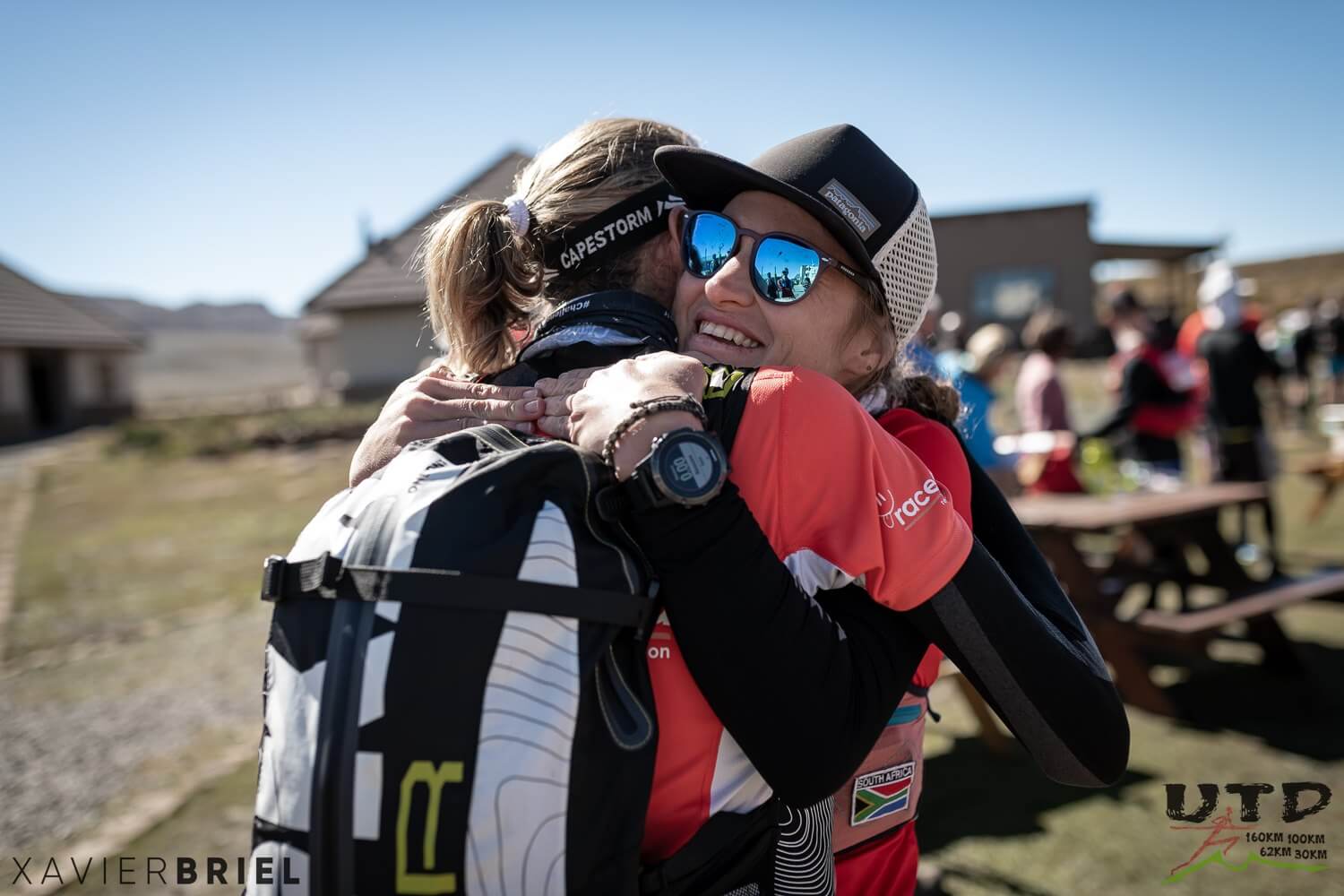 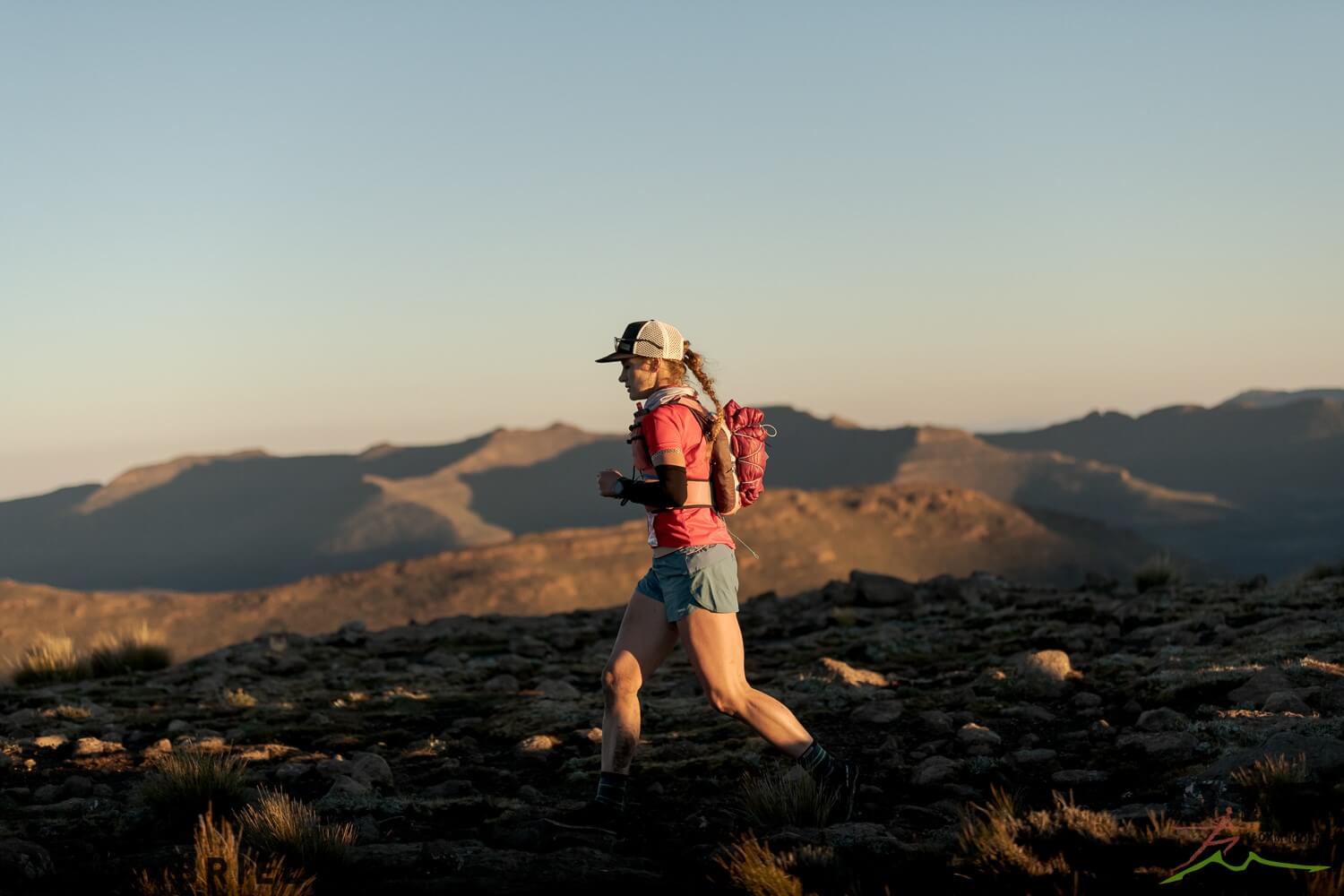 Since the first time I heard about Ultra Trail Drakensberg I was intrigued, excited and really scared by it. But in that perfect balance that makes you want to enter a race more than anything else. After the inaugural 100-miler in 2018 some of the most experienced long-distance runners in the country referred to it as the country’s toughest 100 miler, which only put petrol on the flames. So, when race organizer Spurgeon Flemington offered me an elite entry, there wasn’t an inkling of doubt… Challenge accepted.

We arrived in the Berg on Wednesday, and went for lunch at the Sani Pass Hotel where most of the participants and supporters would be staying before and after the race. I was pleasantly surprised to see so many familiar faces from all over the country arriving- Capetonians, Gautengers, Durbanites, Mpumalangers, even one loud-mouth Free Stater… all ecstatic to be in such a beautiful place, and intermittently glancing up at the massive bright green mountain tops towering over us with nervous-excitement. I arrived with Xavier Briel, one of the official photographers, and the Runcation team. As they were having meetings with organizers, media teams and sponsors I got to be a first-hand witness of how much time, effort and heart went into planning the race. It could only be good.

Thursday went by faster than you can say “race” and before I knew it, I was on my way to registration early on crispy-cold Friday morning. All the 100-mile runners received their goodie bags (with a hand-knit Lesotho balaclava!) and started unpacking their compulsory gear for one final check. Someone commented on how relaxed I looked, but when the marshal asked me where my headlamp was; I couldn’t even remember what a headlamp is and started frantically throwing things out of my pack convinced that I didn’t have one and that it was game over already (Turns out my headlamp was in front of me all along…). We then jumped into 4 x 4 vehicles and started making our way up Sani Pass to where the race would start. The drive up was an adventure before the adventure. The route became steeper, more rocky and windy as we drove past the Twelve Apostles and up, up, up. As Toy Dupper (’19 sweeper and ‘18 100km finisher) was telling me war-stories of last year my stomach started making sharp turns. When we got out in the fresh, but very thin air at the top to stamp into Lesotho, it felt like we had arrived on the moon. There were grey, vast landscapes in every direction and a harsh, cold wind sweeping through. That, and it felt like I needed an oxygen tank to move around. Even walking fast up there makes you out of breath! I looked at Tracey Zunckel – a friend and talented local mountain runner – while standing in queue with my passport in my trembling hand. “How do you feel?” I asked. “I’m so scared” she said. Me too.

We had barely arrived at the top (still enough time for Eloff Hoffman and Frikkie Pienaar to crack a couple of pre-race Maluti’s though), when it was time for race briefing. We became silent as Spurge started talking us through the 160km. By the sound of it, it was going to be cold and very wet, coupled with some good-old bundu-bashing and bum-sliding in some parts. When he started discussing the “Dog Protocol” everyone fell silent. “If you get attacked by dogs, which you shouldn’t, back away slowly and pretend to pick up a rock to throw it with. I promise you the dogs will back away.” (Emmm… Okay. Luckily I have my rabies and tetanus shots sorted…) It was time to get our trackers and Lesotho SIM cards so the fun and games could begin.

We gave our last hugs and smiles and “good lucks”, and we were off. I was immediately out in front, which felt a bit unsettling, but I decided to run my own race – whatever the outcome. I (surprisingly) wasn’t too out of breath and I kept going. Actually, I was trying to keep up with the horse trotting a few paces in front of me. It looked like a local resident that Spurge had organised to lead the way as we started (what I didn’t know at the time was that this horsemen and his friend had orders to stay in front of the front runners to guide them throughout the entire night – which they did! It was incredibly special!). 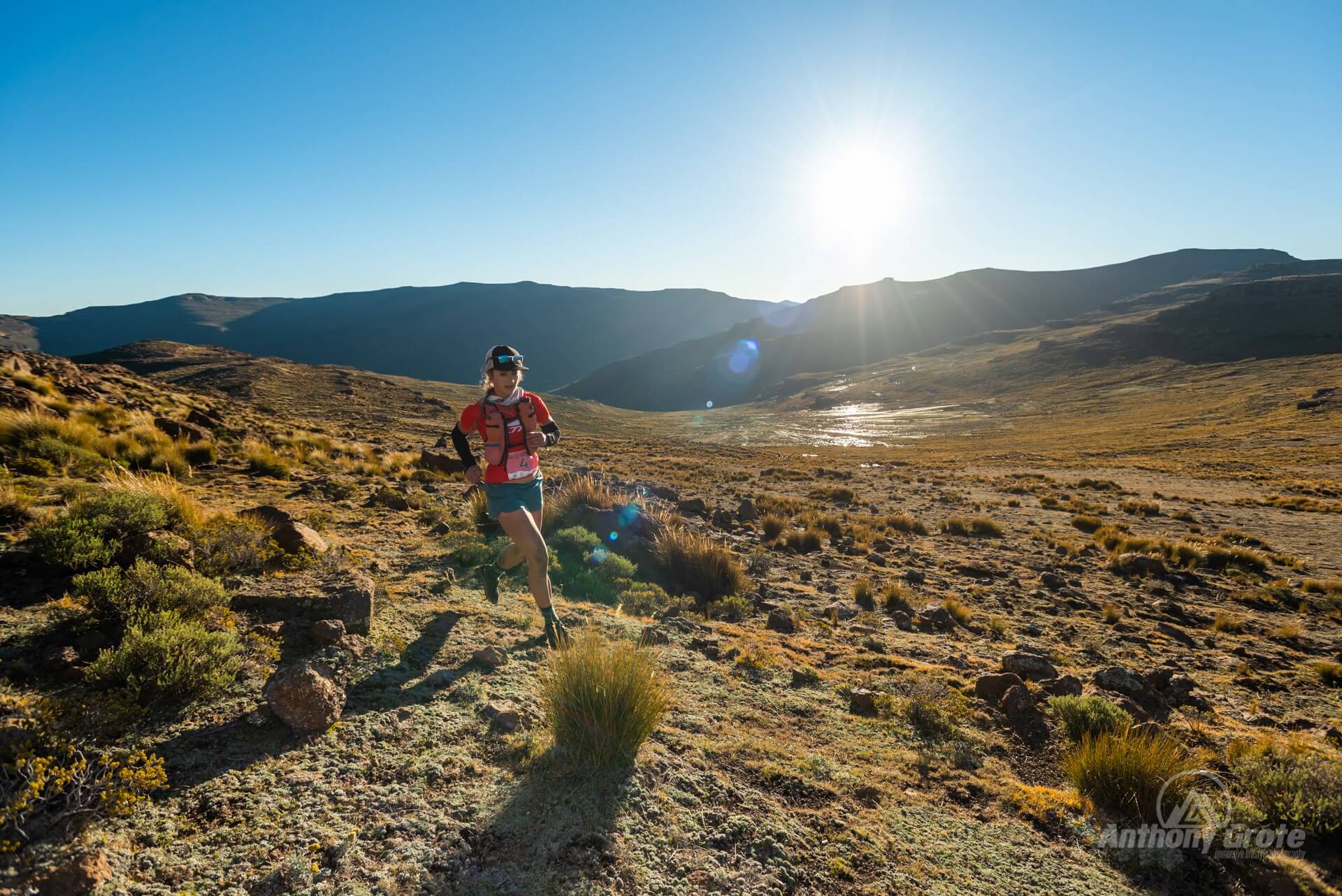 About 10km into the race I noticed a guy (Lauri Toumaal) closing the gap behind me. And it wasn’t long before we were running neck and neck, continually pushing each other. At this stage we ran in silence, except for the occasional “hey, it’s this way”. I think we both thought either one of us will break away at some point (which we never really did!). It was extremely wet everywhere due to the recent rains and not only did we have to make our way through big rivers, but had to navigate carefully over slippery slopes and narrow trails that had become muddy rivers. Most of the rocks where iced over as well, making it even harder to grip on the steep climbs up Black Mountain and the highest point, Thaba Ntlenyana. Both Lauri and I started feeling the effects of the high altitude as we slowly crawled up – an upset, bloated stomach; nausea, headaches and a foggy mind. Up top it was -8 degrees and we could feel it – I couldn’t move my hands and Lauri was struggling to fold his poles. The amazing team that guarded the checkpoint offered us a seat in the tent, but I said to Lauri, “Let’s get off this mountain before we freeze”. We slid down as fast as we could, the horsemen on our tails, and bundu-bashed, bum-slided, stumbled and shuffled our way to Sani Mountain Lodge.

Once we passed the lodge we were starting to feel better – the worst was over, the temperatures and altitude was becoming more bearable, we were running on an established trail and it was downhill most of the way to the hotel. It felt like days had gone by before we eventually reached the 102km mark though. I was happy to see some friends – Carla van Huyssteen from Team Lodestar (a triathlete herself, who knew just what I needed), Heleen Mills (working incredibly hard on the UTD social media while congratulating and motivating us) and Luke Powers (who cracked a joke or 2 always helps). Spirits were high when we left – only 60km to go.

The rest is as foggy as my brain was. I will definitely have to go experience all those beautiful trails and views in daylight and with a ‘sleep monster’-free brain. I remember seeing Xavier taking photos of me – I waved at him and shouted but he didn’t respond. I realised it was a bush before I tried to hug him… it. I also saw a white chameleon on a pitch black branch which, after some thought, I realised probably couldn’t be real either. I remember Rory Scheffer giving me a well-done hug as he passed, before disappearing in the distance (and ended up winning the highly competitive 62km race), and SO many other friends motivating us as they passed. I remember laughing out loud when I saw the Strava section before the Squirrels Nut Butter Check Point, thinking “yeah right”; and that poor Heloise Marshall from TrailMag took off my wet-stinky KingMT Altra’s at the Castleburn checkpoint – something I don’t even wish upon my worst enemy. I do wish I could remember and thank each and every person who supported me during this race though – I don’t think people always realise how much it means to a fragile tired runner 20 hours-plus into a race!

With about 10km to finish Lauri asked me: “Do you really want to compete for first place, or do you think we should finish together?” By now we were waiting for each other at checkpoints; we’ve seen each other fall and get up, pee in the bushes and squirting snot. I’d learned that he is from Finland, but has been living in SA for 2 years; that he cried when he finished his first 100 mile race, and that his family was waiting for him at the finish-line. He learned that I’m exceptionally good at face-planting, and that I couldn’t wait to see Xavier. We looked down at Bushmen’s Neck and set out to finish the last grueling bit (in my opinion the longest possible way with Bushmen’s Neck in view for the extra torture-factor…). We could hear the microphone and see the flags on the last flat 2km stretch, but there was no sprinting. Just me and Lauri telling each other- “we’re almost there.”

And there it is. We ran across the line side-by-side, hands in the air. We won! A 160 kilometer journey in more than 28 hours finally came to an end. The rest is history. 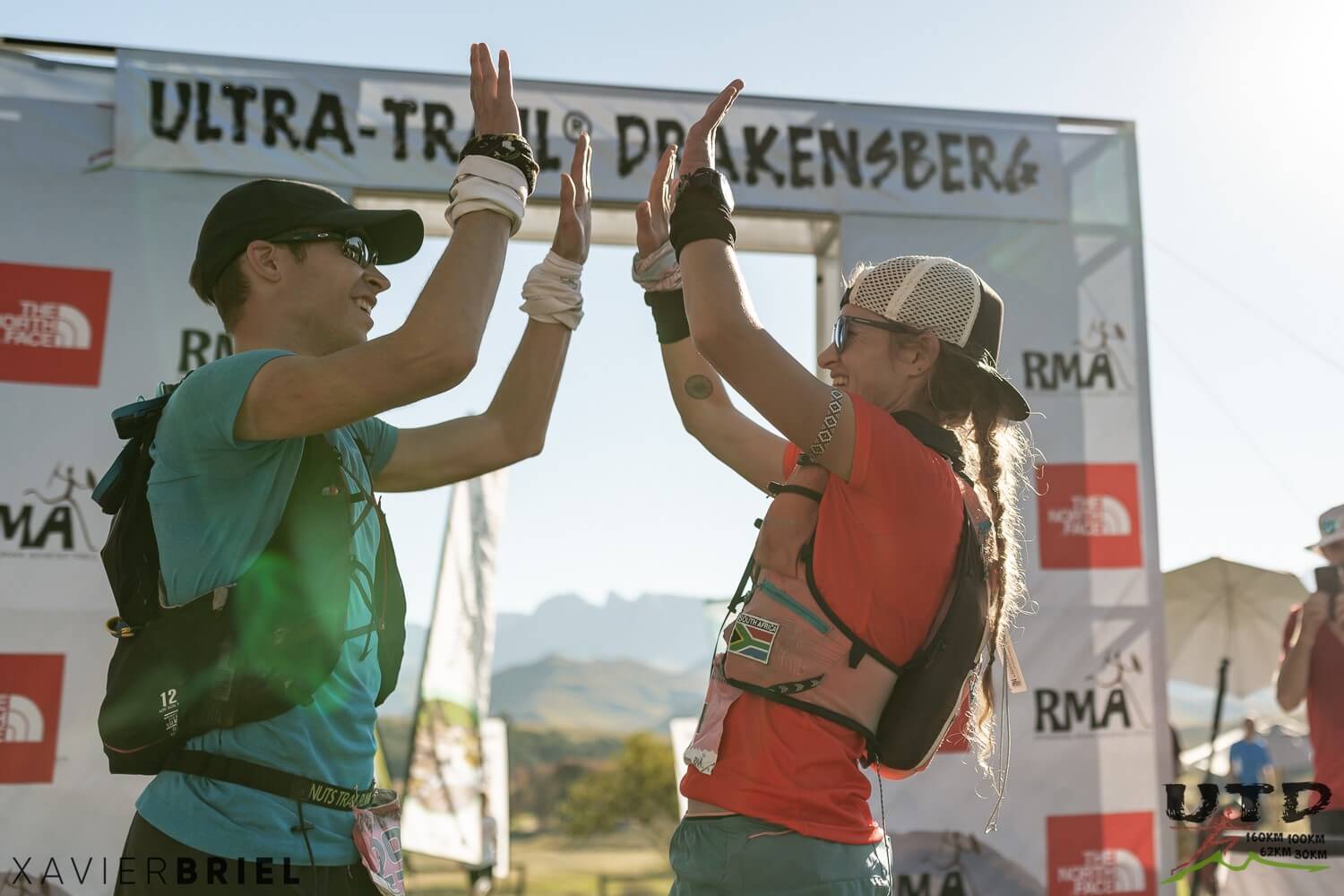 Now that the post-race dust has settled, my feet have returned to their normal size and the Elands-bush scrapes have healed, I can look back at UTD with nothing but than some of my best memories made in the mountains. I would recommend this unique, tough and extraordinarily beautiful race to any trail runner. After all, there really is something for everyone; from 30km to a 100 miles. Spurgeon and his team puts their whole hearts and hours of work into the planning, and the result is a most enjoyable get-together of trail-runners from across the country and a race that ranks very high nationally, and in my opinion, internationally.

While the race is fresh in my memory, I thought I’d offer some tips for anyone interested to take on the 100 miles in the future:

We at RUN are all about community and love to hear from you! Let’s show Naomi some love and leave a comment, well wish or congratulations below. What is your goal race for the year?

2 Replies to “Two Horsemen and a White Chameleon”